The Law Offices of Cesar Ornelas are proud to announce that attorney Cesar Ornelas has been honored with the Presenting Sponsor Award for the recent El Paso Walk Like MADD charity event. MADD, or Mother’s Against Drunk Driving was formed in 1980 and since then has helped over 800,000 individuals who have been affected by drunk or drugged driving and their families. The Walk Like Madd and 5K Dash are the organization’s primary fundraising events, which take place in over 90 cities across the U.S. and raise over $3 million to help end drunk and drugged driving.

As a longtime El Paso personal injury lawyer, Cesar Ornelas has plenty of first-hand experience with the after-effects of drunk driving. He and his firm have worked with families in the city who have been hurt in a drunk driving crash or have a loved one hurt or killed. Cesar works tirelessly on behalf of his clients to help them receive the compensation that they’re entitled to and to mend lives broken by drunk driving.

As the Presenting Sponsor, Cesar teamed up with the local MADD charity at the Crime Victims Memorial Park on October 26th to finish the job that a grieving mother began in 1980. He, along with his team and dozens of other volunteers, walked on behalf of those that no longer could and walked to end drunk driving, fight to impose stiffer penalties for those who do drink and drive, and remember the victims of drunk driving accidents. 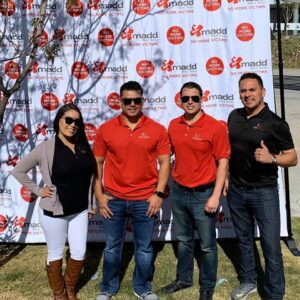 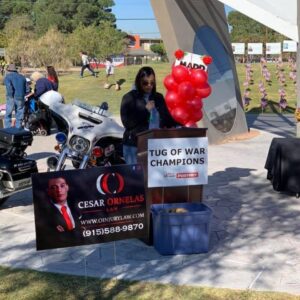 The Presenting Sponsor Award is a special honor in the El Paso community. As the title sponsor of this event, Cesar Ornelas believes in giving back to the El Paso community and working alongside many former clients and friends to reduce the number of victims of drunk driving. With his compassion and understanding of families devastated by these kinds of accidents, Cesar hopes to raise awareness of the dangers of drinking and driving. As a noted member of the legal community, Cesar is diligent about protecting victims and their families in the courtroom.

The El Paso Walk Like Madd event that Cesar Ornelas sponsored raised over $36,000 in community donations and sponsorships of nearly 200 walkers and 22 teams. The funds raised directly impact the community, helping the efforts of MADD to conduct programs like creating education programs for schools about the dangers of drinking and driving and working as a community outreach to communicate the importance of drinking responsibly and choosing a designated driver. MADD also works to advocate for stronger penalties for those who drive drunk, keeping the roads safer for families in the El Paso community and beyond.

At the Law Firm of Cesar Ornelas, we believe strongly in the mission of MADD to protect our town. As advocates for victims of drunk driving, we see the dangers every day and we’re passionate about ending drunk driving in America. We are honored to have received the Presenting Sponsor Award, as a testament to our commitment and beliefs. 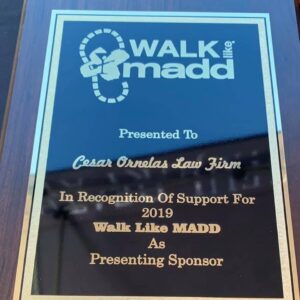