Weight Limits for SemiTrucks in Texas

Take a moment to look around you next time you’re on the road, and you’ll notice an increasing number of semi-trucks and 18-wheelers clogging up the lanes. As Americans have decreased their in-person shopping habits substantially, the roads have become more crowded, with trucks from Amazon, UPS, FedEx, and other shipping companies filling the gap. It has become more difficult – and more dangerous – for the drivers of traditional passenger vehicles to move about on the road.

A semi-truck is any combination of a tractor and semi-trailer units, while 18-wheelers are some of the largest semi-trucks on the road. If a passenger vehicle collides with one of these huge vehicles, the outcome can lead to serious injury or death to the occupants of the passenger vehicle.

The Federal Motor Carrier Safety Administration, FMCSA, notes that trucks operate at greater heights and at higher operating weights than traditional passenger vehicles, making them especially dangerous to occupants of passenger vehicles in accidents. The heavier a truck might be, the more damage it might cause to smaller vehicles and their occupants if they crash.

If semi-trucks and other tractor-trailer combinations are allowed to get too heavy, they can become increasingly dangerous due to the distribution of their height and weight, in addition to other factors. There are laws in place that determine the weight limits that semi-trucks are not allowed to exceed, and if they do, they will generally be liable for any accidents caused, as we’ll discuss.

Been in a truck accident? Connecting with a truck accident lawyer from Cesar Ornelas Injury Law as soon as possible will support the best possible outcome in your claim. We get started on collecting evidence to determine if the truck was in compliance with weight and other requirements, which are regulated by law. Seek the medical help you need, and then never wait to seek the legal help you need from a truck accident attorney. 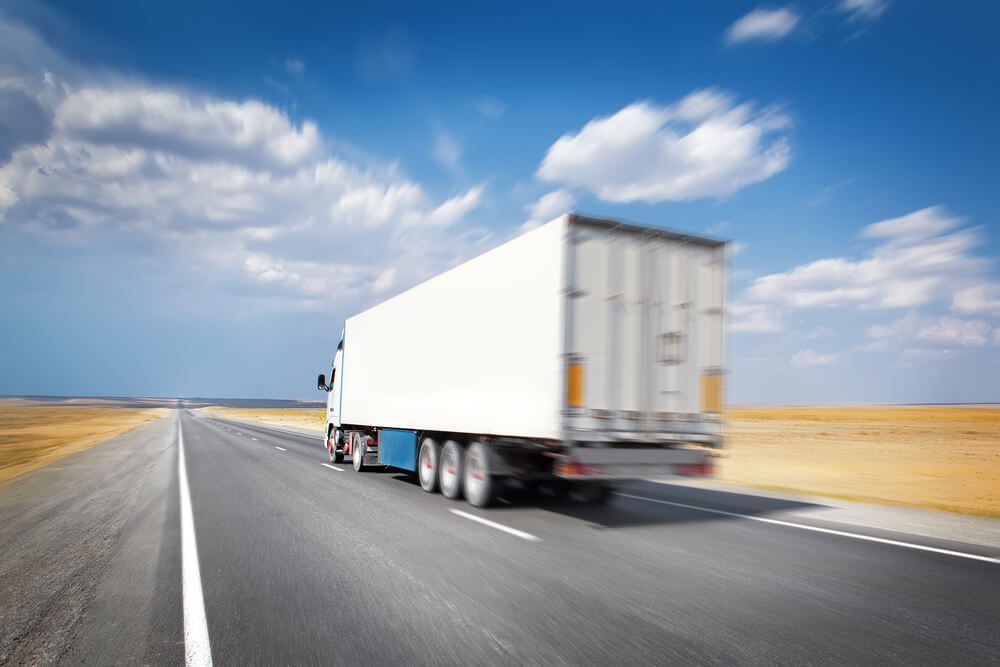 How much does an 18-wheeler weigh?

While traditional passenger vehicles may weigh thousands of pounds, you might have seen someone with a stalled-out car pushing it along in neutral. Unless you are a competitor for the world’s strongest person, it is not possible to do this with a semi-truck. A semi-truck alone generally weighs between 10,000 and 25,000 pounds. When an 18-wheeler is connected to an empty trailer, the weight is generally around 35,000 pounds. The weight of cargo is governed by the law, and when trucks operate in excess of their allowed weight limit, not only are they breaking the law, but also increasing the risk of accidents due to a drop in the operating capacity of the vehicle.

The Weight Limits for Semitrucks/ 18-Wheelers

Semi-trucks are prevented by the law from exceeding 80,000 pounds, which includes the weight of the vehicle plus any cargo the vehicle is carrying on the road.

Weight limits on 18-wheelers are in place to provide protection not only to the truck driver, but to all drivers on the road. This is because the weight of a semi-trailer will significantly impact the truck and driver’s ability to safely drive and maneuver on the road. For example, if road conditions or a sudden situation demands, heavier vehicles are not able to react as quickly as other vehicles by changing lanes, abruptly stopping, or swerving to avoid an accident.

Is there a maximum weight limit per axle?

The actual weight limit for a given axle will depend on its location on the truck. Axles linked to steering have a maximum weight limit of 12,000 pounds, while the trailer and drive axles’ total weight should not exceed 34,000.

If a truck exceeds payload capacity, what happens?

When a semi-truck that generally weighs tens of thousands of pounds is a few pounds over the weight limit, there is not generally cause for concern. The majority of weigh stations will require that a driver cease operations when they are 6,000 pounds or more over the maximum weight limit.

When a semi-truck exceeds maximum weight limits, other serious outcomes may result. Cargo may arrive late due to delays, or the driver may be unable to continue on their route until a backup truck arrives so the extra weight can be unloaded. These types of delays cost trucking companies income and can lead to complications and difficulties with their relationships with customers due to tardiness.

It is possible for a driver to even face jail time for an overweight 18-wheeler. Some states have established laws that punish drivers with up to two months in jail for violations. It is also possible for county courts to revoke the truck driver’s license in certain instances of driving overweight.

The most common outcome of weight limit violations for 18-wheelers is fines. The amount in fines that a truck driver and/or their employer may be responsible for will vary depending upon the area. In some states, for instance, the truck driver could receive a fine of up to $16,000. Other states may also fine the truck driver’s employer up to $10,000 if their trucks exceed weight limitations. An increased number of offenses can lead to fines being doubled or even tripled in many locations.

What if a truck driver does not stop at weigh stations?

Given the importance of delivering their cargo on time, and the value-added trucking companies can experience when they are ahead of schedule, truck drivers often will make as few stops as possible. Weigh stations can be a time-consuming burden to some truck drivers, and however much a truck driver might not like them, they are still required to use them.

Each state has its own rules concerning weigh stations. Generally, commercial vehicles that weigh in excess of 10,000 pounds are required to go to a station. Even empty semi-trailers and bobtails are required to stop.

The only exceptions to weigh stations are if a truck has a green light with a PrePass. With each passing year, surveillance cameras are becoming more and more common on the roads. This makes it easier for authorities to obtain photographic evidence of trucks that have failed to stop at weigh stations. When a truck is discovered to have violated a weigh station rule, the authorities may then reach out to the company concerning the violation.

When a trucking company is notified that one of their employees has broken the law and skipped a weigh station, it can lead to the driver losing their job, and depending upon the laws of the state, can also lead to the driver being issued a fine of up to $300 for the single violation. The amount of the fine can increase depending upon whether or not equipment issues were identified with the truck, such as compliance with bumper laws. In some situations, a truck driver may have their license suspended.

If an accident has been caused by a trucker, your truck accident lawyer can check to determine whether or not the 18-wheeler or semi-trailer was carrying a load that exceeded the legal limit. If the load is found to be in excess of the law, it could also constitute negligence, which would lead to the trucking company being liable to compensate you for your injuries.

Other Basics of a Semi-Truck

What number of gears are in an 18-wheeler?

As the engine of a motor vehicle produces power, the energy that results passes into the wheels to propel the vehicle forward. Gears are used in most vehicles to control the output power of the engine, which in turn helps to decrease speed when necessary, or to generate the force needed to rise over hills and obstacles on the road.

Given that semi-trucks and 18-wheelers are heavier, longer, and bigger overall than a traditional passenger car, like a sedan, SUV, or minivan, they also require more gears. Often a semi-truck will have 12 gears, while some have as few as nine, while others might go all the way up to eighteen gears. When a gear is poorly maintained or breaks, it can lead to dangerous operating conditions for the truck that can cause accidents.

How many axles does an 18-wheeler have?

A traditional car will have two axles to rotate the wheels. As vehicles increase in size and length, they require more wheels, which in turn require additional axles. Semi-trucks can vary significantly in terms of length, though the average size of a semi-truck is 70 to 80 feet. This increased length in turn requires the addition of more wheels and axles to support the vehicle and the load it is carrying.

18-wheeler semi-trucks have 18 total wheels, so they require additional axles. Generally, these trucks have five axles, with one axle in the front where the driver sits, while the other four connect to the trailer.

Are semi-trailers required by law to have safety bumpers?

As reported by the National Highway Transportation Safety Administration, NHTSA, large trucks are required to carry a variety of safety features, including bumpers and rear-impact guards. When a semi-trailer has a bumper in place, the risk of serious injury or death to the occupants of vehicles that collide with them is reduced. The benefits of a safety bumper are so significant that federal laws have been reinforced to require them.

A rear underride crash, which is often fatal, happens when the front end of a vehicle crashes into the back of a vehicle that is larger, like a semi-trailer or 18-wheeler, and the light vehicle slides beneath the larger vehicle. These accidents are especially dangerous to the occupants of the passenger vehicles, and the occupants of these smaller vehicles are at a disproportionately greater risk of serious injury or death than the driver of the semi-truck.

The increased risks associated with operating semi-trucks and 18-wheelers have led to the enactment of new laws and protections for drivers of passenger vehicles on the road. Recent laws established by the Biden Administration and enacted through the NHTSA have created new requirements for roll-over protection for semi-trucks and 18-wheelers. Two Federal Motor Vehicle Safety Standards have been upgraded to improve protection for both drivers and passengers in light vehicles in the event a rear underride crash occurs. The new rule requires rear impact guards with enough strength and energy absorption to protect the occupants of passenger vehicles in crashes, improve driver safety and help prevent deadly accidents.

Connect with a Truck Accident Attorney in San Antonio

If you or a loved one has been in an accident with a semi-truck or 18-wheeler, you could be entitled to extensive compensation. To begin the process of determining what you are entitled to and starting to collect, reach out to a truck accident attorney from Cesar Ornelas Injury Law now. Visit our site to schedule your free consultation, or give us a call at (855) 594-3878.

Your initial consultation is risk-free and cost-free, during which we’ll collect some basic information about your case. If we determine that we can help, we’ll go over how payment works, but it is helpful to know that we only get paid if we win. You have nothing to lose by seeking help from our legal team as soon as possible following an accident. Reach out to our experienced San Antonio truck accident attorneys now to get started.